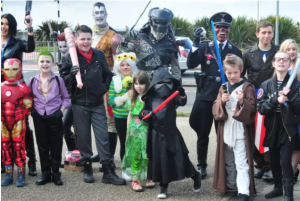 
Morecambe Comic-Con was a huge success this Easter Monday with around 1,500 visitors to the event at the Platform. Gary Jones, an organiser of this year’s Comic-Con, commented that he was pleasantly surprised with the high turnout and felt that the great weather added its success.

Guest celebrities included Paul Warren and Paul Blake, who have played Varmick and Greedo respectively in Star Wars; Colin Baker, the sixth Doctor Who, and James Mackenzie, past presenter of children’s game show Raven. James MacKenzie spoke to The Visitor, noting “it’s great going to a comic-con, I get to meet so many lovely people who are passionate about the genre. Today has been fantastic, lots of people have come and said hello, everyone is really friendly.”

Sci-fi fans arrived in a variety of costumers, from Captain Jack Sparrow to Pearl from American animation Steven Universe. There was even a remote controlled R2-D2 that took its owner, Darren Poulson, four years to build with help from the national R2-D2 builders group.

Sound like fun? Make sure to put the next Morecambe Comic-Con in your diary! On August 28th this event will be returning, complete with an inflatable outdoor gazebo!

Picture and news from The Visitor