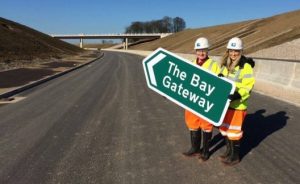 
The A6 Lancaster Road will shut at the new bridge that has been built between Beaumont College and Hest Bank Lane to carry it across The Bay Gateway.

That will begin at 11pm on the night of Friday September 9 and the A6 will not reopen until 6am on Monday September 12.

That job was originally planned for this weekend (September 2-5) but was postponed due to the wet weather.

Meanwhile, the M6 will close overnight in both directions between Lancaster and Galgate on the nights of Friday September 9 and Saturday September 10.

Those closures will take place between 10pm and 8am each night between junctions 34 and 33.